What is periwinkle plant ? A Periwinkle is very common plants that are found in India. Periwinkle is also known as “Sadapushpa” or “Sadaabahar”. It is botanically named as Catharanthus roseus and belongs to Apocynacea family. 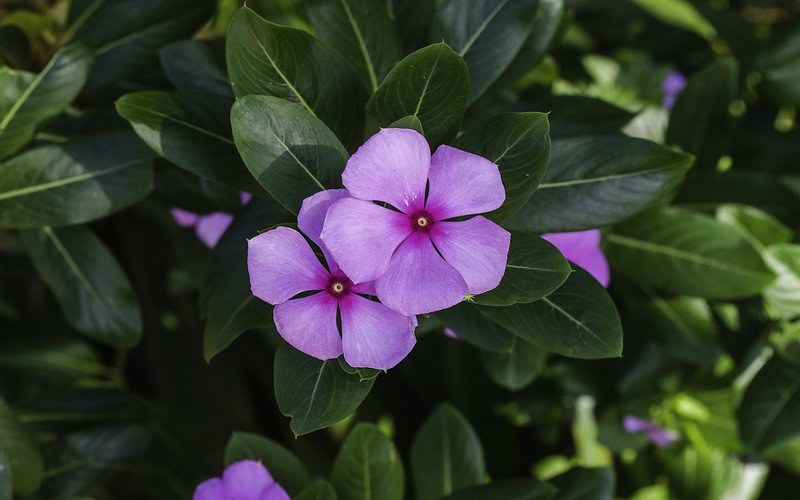 It is a shrub that grows to a height of 1-3 feet having smooth, glossy, dark green leaves, and flowers throughout the year. This plant is known by three names such as Myrtle, Vinca and Periwinkle (or Madagascar periwinkle). The Botanists have separated strain or variety of Periwinkle.

The Periwinkle flowers are found in different colors such as blue, purple, violet pink and white. The Vinca plants are native to North America, Europe, China and India.

According to principles of ayurveda this plant increases dryness of tissues and is light to digest. In Ayurvedic medicine the leaves, seeds, flowers and the roots are used for treatment of diabetes, Alzheimer’s, cancer and menorrhagia.

It is also effective in leukemia so called “raktarbuda” in ayurveda. It relieves vata and kapha so it can be used effectively in management of the diseases related to Vata/ Kapha or Vata – Kapha origin.

The paste of leaves is used to apply on wounds which occur due to insect bites. The antibacterial and antivenom qualities of the plant heal the wound faster.

Periwinkle plant has about 86 alkaloids extracted from plants in the Vinca genus. The chemotherapy agent known as vincristine is extracted from Vinca rosea (Catharanthus roseus) is used to treat disease such as diabetes, leukemias, high blood pressure, lymphomas, stroke and childhood cancers as well as several other types of cancer and some non-cancerous conditions.

Periwinkle plant has been used around the world for more than century as a food, medicine, decoration, garlands etc. According to Scott Cunningham a author of “Cunningham’s Encyclopedia of Magical Herbs,” have mentioned many uses of periwinkle.

In Europe it is used for snake bites, a remedy for poison and to protect against wild beasts, the evil eye and spirits.In 17th century an herbalist name Dr. Nicholas Culpepper had recommended periwinkle leaves to treat to reduce heavy menstrual bleeding.

Beside this he also recommended for bleeding in the mouth, noses and also suggested married couples should eat periwinkle leaves as it  “cause love between them”. The other uses of periwinkle for various chronic diseases are given below.

Scientists have already started experimentation to look at the anti-diabetic and hypoglycemic properties of periwinkle leaves. The researchers in Bangladesh of Mymensingh Medical College investigated the effects of Madagascar periwinkle in diabetic rats.

They have found that Madagascar periwinkle had a significant effect on controlling the levels of blood sugar. The study was published in “Mymensingh Medical Journal” in 2007.

The research shows that a strong hypoglycemic (is a condition characterized by an abnormally low level of blood sugar) effects was seen in both diabetic and non-diabetic rats.

The researchers confirmed that the properties of greater periwinkle may be useful in treating diabetes, but more research is needed to test the effects and safety of the plant in humans.

The leaves and seeds of the periwinkle contain vincamine, a precursor to the chemical vinpocetine, which is a powerful free radical scavenger. Vinpocetine is used as medicine to enhance memory in aging minds.

Vincamine is as a chemical extract in a supplement form, but the herbalists advise the whole herb to be used in either tea or extract form by using the whole herb one can receive the balanced blend of healing properties that are found naturally in this plant.

Vinpocetine may also help to prevent senility and dementia by preventing damage to the blood vessels in the brain that are caused by free radicals. Vinpocetine thins blood as well as boosts circulation to the brain.

It improves the brain’s ability to absorb nutrients which improve brain function.Periwinkle and vinpocetine are found to be very useful for the treatment for many brain diseases, especially stroke recovery.

It has been used in Europe and Japan as a natural therapy for stroke, as it helps to increase blood flow to areas of the brain with minimal function.

Vinpocetine is a chemical derived from vincamine, which is found in the leaves of common periwinkle as well as the seeds of various African plants.

It is used as a treatment for memory loss and mental impairment. It has shown some benefit to people who were associated with Alzheimer’s disease symptoms.

In a preliminary study it was found that vincamine itself has shown to be beneficial in a later double-blind trial. In Europe Vincopetine medicine is sold as in the name of Cavinton and in the US it is also sold as a dietary supplement.

These properties may also exert immunosuppressant activity which may interfere with other components of the cell cycle to induce cellular death.

The Vincristine and vinblastine are also used for the treatment of leukemia, Hodgkin’s disease, Wilms tumor, neuroblastoma, malignant lymphomas, Kaposi’s sarcoma and mycosis fungoides and many others related diseases.

The researchers and experts have not yet specified the particular doses of periwinkle, but pure alkaloids vincristine and vinblastine are used in cancer therapy as single weekly IV doses of 0.05 to 0.15 mg/kg and 0.1 to 0.2 mg/kg respectively.

How To Make Periwinkle Tea

With so many health benefits, periwinkle tea has to have a few side effects too. Here are some which you must have to be careful with.

WARNING – Periwinkles are members of the Dogbane family many members of these are big-time poisonous when ingested. So if you are going to try internal concoctions made at home, do it with extreme caution and in extreme moderation.

“NOTE: This herb has to be consumed only under the supervision of a qualified doctor. It should not be used directly as it is extremely toxic and may cause damage to the liver, kidneys and nerves and in some cases it may result in death as well.”