Neem tree has been used as medicine throughout the world due to its vast properties. In India neem is known by many names such as margosa Indian lilac, Nimtree, neem, etc. In scientific term, it is known as Azadirachta indica. 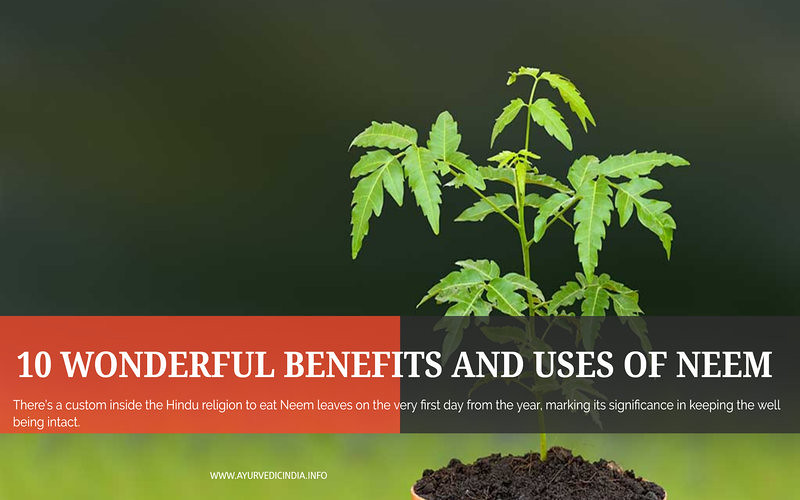 In India, it is also called as sarvaroganivarani or reliever of sickness. The neem tree is believed to be as a ‘village dispensary’ due to its multiple health benefits

It is a fast-growing Neem tree (Azadirachta indica), it can reach a height of about (115-131 feet)15 to 20 meters. The Neem tree trunk is straight, short and has a diameter of (4 feet) 1.2 meters, Neem is widely cultivated in tropical and subtropical regions of India, Myanmar, Bangladesh, Sri Lanka, Malaysia, and Pakistan.

Young leaves are reddish to dark purple and become green pinnate leaves at maturity. The fragrant white flowers are arranged in panicles hanging, about 25 cm in length. Neem tree is also known as’ Divine Tree “in India.

What parts of the neem plant are used?

All parts of the tree are used: bark, leaves, fruits, flowers and roots, each with very beneficial applications.

Traditional Use Of Neem

Today neem plant (Azadirachta indica) has fascinated millions of people worldwide due to its wide range of medicinal properties. Neem has been extensively used in Ayurveda, Unani and Homoeopathic medicine since ancient times.

Neem produces a vast variety of biologically active compounds that are chemically varied; it has more than 140 compounds, which have been formed in different parts of neem.

All parts of the neem tree such as flowers, leaves, fruits, seeds, bark, and roots have been used traditionally for the medication in infections, inflammation, skin diseases, fever as well as dental disorders. Below are some of the medicinal uses of neem plant in points with its properties.

1. Immunostimulant Activity: It is also known as immunostimulators, it is bodies (ie.nutrients) that stimulate the immune system by generating or by increasing the activity of any of these components. Neem tree extract of bark, leaf, and oil possesses this immunostimulant activity.

3.Antihyperglycaemic: Regular consumption of neem leaves extract can remarkably lower blood sugar level and also prevents epinephrine as well as glucose-induced hypoglycemia. In the study, it has been found that leaf extracts and seed oil have a hypoglycaemic effect that can be useful to diabetic patients.

4. Antiulcer effect: An ulcer is mainly defined as an inflamed break in the skin or the mucous membrane lining in the alimentary tract. Disturbance of the normal equilibrium caused by either enhanced aggression or diminished mucosal resistance sources an ulcer. Neem leaf and bark have been highly antacid secretory that can work as an anti-ulcer remedy.

5.Antimalarial activity: Neem has properties called gedunin which is very effective for treating malaria. It is due to this property in neem seed and leaf extracts are effective at both chloroquine-resistant and sensitive strain malarial parasites. Neem is used to treat malaria fevers in Ayurveda for ages.

Note: Neem has natural anti-oxidant properties that can protect the liver and kidneys and vital organ of our body, only if proper amount of dose is consumed. If you intake excess amount of Neem in any form it may cause serious damage to these vital organs. These may cause side effects such as jaundice, yellowing of the skin, urinary tract infections such as reduced production of urine.