Camphor or so-called as Kapur/Kapoor is a white waxy solid with a firm crystal clear strong perfumed spice. It is extracted from camphor plant’s leaves and bark and obtained by isoprenoids through the chemical formula C10H16O. 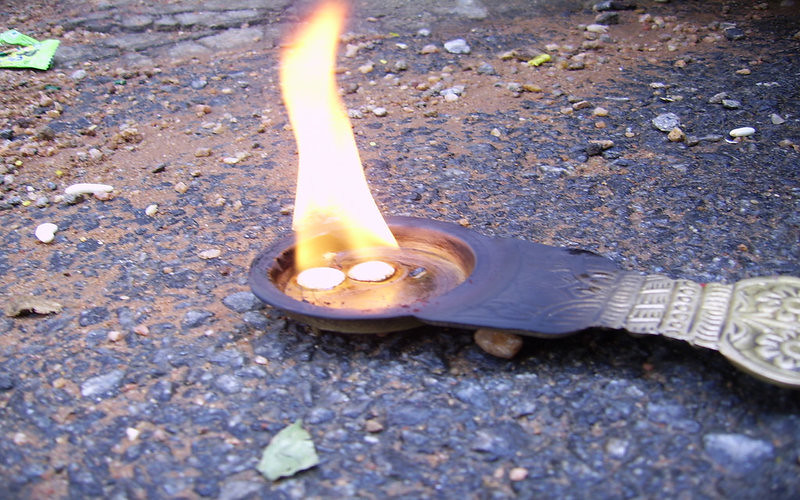 It is found in the wood and leaves of the laurel camphor that is scientifically known as (Cinnamomum camphora). It is a huge evergreen plant that can grow to about a height of 50 to 100 feet.

The branches are spread all around so they look much broader beside tall. It has a very rough pale bark and fissured vertically. It produces clusters of berry-like fruit which are black in color, each berry fruit around (1 cm) in diameter.

It is an evergreen tree that grows in exotic conditions of Asia, Japan, Indonesia, Vietnam, and Taiwan and has been introduced to many other countries. Cinnamomum camphora is believed to be native to China’s southern part of the Yangtze River.

Camphor Names In Other language

In India Camphor has its own importance it has a unique position in the Hindu tradition of pooja, other festive function and traditional law.

Among the varieties of camphor, the “Bhimseni Kapoor” has its own importance, it has been used in ayurvedic medicine and puja since ancient time.

It is also called as Malay camphor, Sumatran camphor, Borneo camphor or Barus camphor and is heavier by nature that sinks in water easily than Chinese camphor.

It is naturally formed in the stems of Dryobalanops plant, it has about seven subfamily species, it is found in cluster form in the tropical forests of Sumatra, Peninsular, Borneo and  Malaysia West Malesia.

It is believed that the ordinary camphor has savior (Tarak) properties by nature and it can be used to invoke the Saviour Principle of the Deity during worship.

Whereas the Bhimseni camphor has destroyer (Marak) properties by nature, is more powerful than ordinary camphor.  So it can invoke the Destroyer Principle of the Deity during worship.

Due to the properties of Marak (Destroyer), it is believed to be more useful in destroying negative energies and for casting off evil-eye.

Besides this, it has various properties such as

The burning of camphor in an Indian tradition has a special meaning. It is believed that when pure white color camphor when burned acquires the huge fire (Agni) and burn completely, without leaving any residue.

The same way when lighting camphor before God can destroy a sign burning our illusion or ego with the fire of true knowledge, which will merge with God, leaving no residue.

Camphor is used daily in Hindu family to light diyas, by burning camphor as part of daily prayer. It also contributes to purify the surrounding air and prevent harmful bacteria, viruses, and mosquitoes away.

Camphor has extraordinary medicinal properties. It safeguards us against many illnesses by killing bacteria that prevails in the warm atmosphere; it prevails in most parts of India.

According to Ayurveda when the camphor is burned it purifies the atmosphere. When the devotees place their palms on Aarti (a plate in which camphor is burned) and put the palms of his nose and eyes, they absorb the medicinal benefits.

In Aarti camphor remains for a very short time, in Hindu mythology, it signifies as a human that has a short span of life. It is the physical and sensual pleasures that come from attachments caused by Avidya or so-called Agynana.

Therefore, Aarti motivates devotees to discover God, which is permanent. As Aarti is short-lived, it compels the devotee to focus their attention on God.

How To Uses Camphor As Mosquito Repellent

Using Camphor as a natural mosquito repellent is very simple. No need to burn camphor. There are two simple ways to execute it.

Camphor has been used as traditional medicine for cough and cold it can be used with water, boil it for about ten minutes and inhale the vapor it is an excellent way to treat cough and cold.

Every time a person contends with severe cough and cold he can breathe in the vapor of camphor and boiling water to get relief.

When the camphor is breathed in form of vapor it forms a coating around the inner surfaces of the respiratory organs this way it helps in reducing irritation of the throat and is also very effective in treating bronchitis.

Research on Camphor extracts reveals that it has a significant amount of antioxidant properties in it. The Antioxidants are biochemical that can actually help in reducing all the oxidation process that can lead to the creation of free radicals.

The Free radicals are chemicals that alter the tissues and cells in our body and may lead to ailments such as diabetes, liver disease, cardiovascular disease and some time it may even cause cancer.

Neuralgia is a severely painful situation, is triggered when the ninth cranial nerve is affected due to inflammation of the blood vessels surrounding and it may be treatable using camphor oil.

The camphor oil can make the blood vessels contract and therefore it reduces the pressure around the ninth cranial nerve. This is really is another best use of camphor used as painkillers.

Camphor has been used as traditional medicines, like Ayurveda, and in Chinese tradition for a long time to get rid of muscle pain and rheumatism.

Study on the Camphor extracts has found that it has anti-inflammatory properties that not only restricted to muscle aches but also lower the cholesterol levels.

The study was done on extracts of camphor leaves, it has been found that it has anti-microbial qualities that are capable of managing bacterial and fungal strains to some extent.

Apart from the antimicrobial qualities, it also has various essential oils that have insecticidal qualities. So it ’s clear that practice of using camphor as an anthelmintic drug in Ayurveda was clinically right.

Note and Precautions: Doctor’s report that camphor can be poisonous when ingested, it is a common material used in chest rubs and sprays for congested sinuses and relieves cold symptoms. Camphor works by causing the airways more sensitive to cold air which provides false relief from the congestion. Excessive use of camphor balm rubbed on may also cause seizures. It may cause symptoms such as nausea, restlessness vomiting and stomach aches.

« Health Benefits Of Spinach leaves & Roots
What Is The Best Home Remedy For Toenail Fungus? »