The Medicinal plants are widely used by practitioners of traditional medicine to cure various diseases in their daily practice. 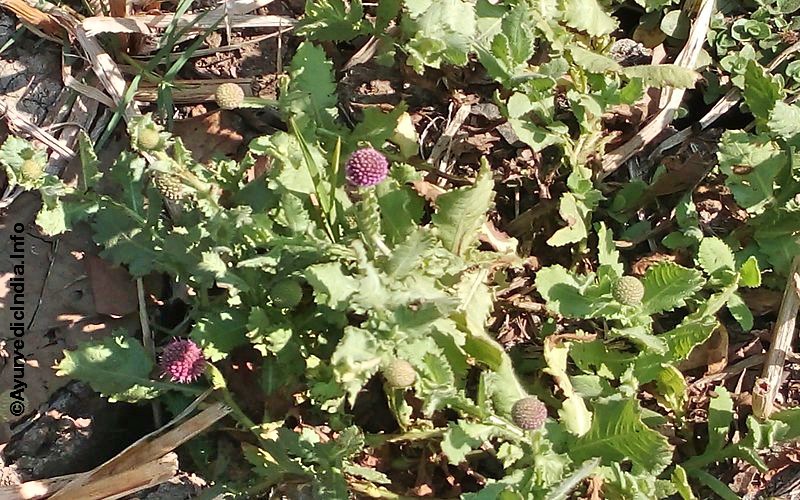 In the traditional system of medicine, different parts of plants or trees are used such as leaves, stems, flowers, seeds and some time even whole plants are used.

It is used for various diseases in the Indian system of traditional medicine known as Ayurveda. Sphaeranthus indicus is a plant species that belonging to the Sphaeranthus family of Asteraceae.

It is an aromatic herb with spreading the spread of glandular hairy stem and branches with purple or pink flowers. It has Stems with toothed wing, alternate, toothed leaves.

The flowers are terminal, globose with purple inflorescence head. It is also known by various names such as the “East Indian globe thistle” in English and Mundi, Gorakhmundi in Hindi Bengali, Marathi and Gujrati. Mundi is the Sanskrit word literally means that which cuts off or wards off.

In the ancient scriptures of Ayurveda, it is mentioned to be one of the best herbs used as Rasayana Madhya – intellect promotes grass.

Sphaeranthus Indicus is pungent, bitter and sweet in taste, pungent in the post-digestive effect and has hot potency. It Alleviates kapha and Vata doshas, it is light and dry in nature.

It can be used is a nerve tonic, diuretic, vermicide, and blood purifier. It is also useful in various diseases such as skin diseases, epilepsy, obesity, filariasis, anemia, diseases of the anus and vagina channel, etc.

The Antidiabetic Activity: The hypoglycemic effects were studied in Wistar rats with the dry ether extracts oil from the flower head of S. indicus.

Several studies showed that alloxan (a toxic glucose analog) was selectively toxic to pancreatic beta cells,( The cell that store and release insulin) which leads to induction of cellular necrosis.

The cytotoxic action of alloxan is moderated by (ROS) reactive oxygen species, with the synchronous massive increase in cytosolic calcium concentration, leading to a rapid destruction of beta cells.

The extract was applied with a dose of 50, 100 and 200 mg kg per body weight. It was found that the extract dose of 200 mg kg” has outstandingly lowered the level of blood glucose to (107 ± 4.09) of diabetic rats when examined after 6 hrs. This report supports the traditional claims of S. indicus for anti-diabetic activity in the Bundelkhand region.

The Antiallergic Activity: S. indicus effects were studied in stabilizing MCAS (mast cell activity). The preventive effect of different extracts of the whole plant of S. indicus was performed against sheep placenta serum.

The ethanolic extract of S. indicus at doses 150 and 300 mg kg-1 and the ethyl acetate extract dose range from100 and 300 mg kg-I showed better protection of mast cell degranulation (77-86%) slightly to standard drug ketotifen (75%) in the model sheep serum.

Sphaeranthus indicus is widely found throughout India. It is said to contain eudesmanolide, sterol glycosides, sesquiterpenlactones, flavonoids, and many essential oils.

Pharmacological studies have confirmed the therapeutic value of Sphaeranthus indicus but there is less information available on clinically. If these claims are scientifically assessed clinically, then you can you can use it for various ailments without any risks.