Terminalia Arjuna is also known as Arjuna herb or Arjuna tree. It is a plant Arjuna is native to Indian subcontinent, it is found from east Myanmar towards the south Sri Lanka. 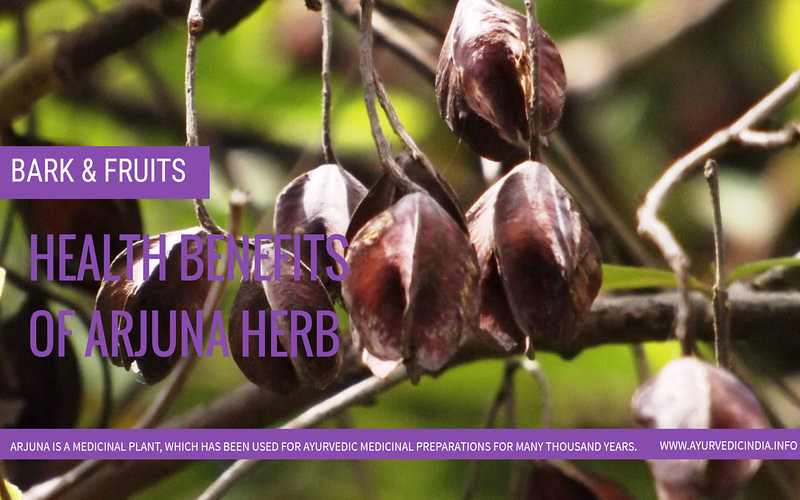 The name Terminalia derived from a Latin word ‘terminalis’ or ‘terminus’ means “ending”. In other words it is refer to the habit this plants leaves that are being crowded at the tips of the shoots.

The name ‘Arjuna’ is also well described in the ancient Indian script known as RigVeda and Atharvaeda. In this it is term as a “white” or “bright” or probably the shining quality of its (Chaal) bark.

It is a plant that has been used in ayurvedic medicine preparations for many thousand years. But use of Arjuna was re- introduced as a treatment for heart disease by Vagbhata in 7th century CE.

He traditionally prepared as a milk decoction form Arjuna tree. Then after he mentioned many uses of it in his writings, for the treatment of ulcers, hemorrhages, wounds and applying topically as a powder.

Where Is Arjuna Tree Found In India

The tree Terminalia Arjuna is common found throughout India. They are especially seen in the sub Himalayan tracts and Eastern India.

It mainly occurs along the river banks and streams in north and south India.

How Does Arjuna Tree Look

It is a large evergreen plant that grows about 20-25 m tall. It have a spreading branches, they are fast growing.

It have a gray colored thick (Chaal) bark  pale, which are hard externally and smooth inside, it flakes off in large flat pieces.

The leaves of the trees are simple, they are freely attached, opposite to each other and are elliptic-oblong or oblong in shape.

The flowers are stalk less and found in clusters or in auxiliary spikes. The fruits are ovoid- oblong, 5-7 hard angles or wings making it convenient for disposal by wind.

Uses Of Arjuna In Ayurveda

Arjuna is an important herb of Ayurveda and all parts of the plant are used in making Ayurvedic medicine.

The most valuable part of plant is its bark, when cut it gives a milky white sap. It also contains a valuable alkaloid, which is known as he arjunine.

Beside this it have chemicals such as lactone, sugars, arjunetin and several essential oils.Below are some of the uses.

1. It Manage Shortness of Breath

Shortness of breath is generally seen in heart patients it is when the narrow coronary decrease the supply of oxygen to the heart.

Terminalia Arjuna had a property that reduces narrowness of the blood vessels.

It has a low-grade inflammation nature that reduces the deposited plaque in the blood vessels and thus helps in treating breathing troubles in heart patients.

It can give best results when used in combination with other herbs as described under coronary artery disease heading.

Arjuna can be very helpful in dealing with cardiovascular disease; it rectifies the functions of a left heart ventricle.

It strengths to the heart muscles and develops the heart’s capacity to pump the blood. Arjuna’s cardio protective actions help to protect the optimum functions of the heart and accelerate the healing process for cardiac injury.

It is an herb that is generally used for prevention from Heart attack. It is because it has an anti-atherogenic property, which helps to reduce a plaque buildup in the coronary arteries and improves the blood flow to the heart tissue.

Besides this, it also improves blood flow to the heart and reduces blockage of coronary arteries. In addition, it has antioxidant property, which helps to maintain the cardiovascular health.

Terminalia Arjuna decreases signs of heart failure by increasing the volume index of left ventricular stroke and ejection process. The study also indicated that it helps to improve performance and effort tolerance.

The study in a rat also revealed that Arjuna bark( Arjun Ki Chaal ) repressed lipid per oxidation and acts as an antioxidant and had a comparable effect as fluvastatin, Lescol an approved modern drug.

High blood pressure or hypertension is an extremely serious medical disorder that can cause a heart failure.

Besides this, it can also have various complaints related to it such as coronary heart disease (CHD), stroke, heart attack  and kidney failure, which are the most serious health problems related to it.

The common signs of high blood pressure include severe headache, vomiting, uneasiness, vision changes, nose bleeds and confusion. Uses of Arjuna bark can be very helpful in these circumstances.

The herb Arjuna is high in Coenzyme Q10 it is a catalyst a natural antioxidant that is synthesized by the body and produce the energy in the body for normal functioning of the body.

It additionally safeguards the heart against damage caused by LDL cholesterin oxidization. Most of the Coenzyme Q10 is used by the liver and the heart as it is the main organ that functioned as the body.

So Using Arjuna can build-up the artery walls blocking the walls and bring up the blood pressure. Today supplement of Coenzyme Q10 is advised to improve heart functions and to lower the high blood pressure.

Coronary Artery is a disorder which is a common cause of heart failure beside to uncontrolled hypertension. Using Arjuna can help to block its development of plaque accumulation.

It reduces inflammation in the blood vessels and coronary arteries and also controls cholesterol deposits and creation of plaque.

But if used along with other herbs like Tamra Bhasma ,Shuddha Guggulu ,Pushkarmool can work effectively to clear the blockage caused by cholesterin deposits.

Terminalia Arjuna is an herb that has hypolipidemic and anti-atherogenic properties. These properties help to reduce low-grade inflammation of the blood vessels.

In a study on rabbit, it was found that it had a reduction in the atherosclerotic lesion in a rabbit’s aorta. These effects are most provably due to its anti-inflammatory, antihyperlipidemic and antioxidant features.

So we can say that Arjuna bark can be beneficial in decreasing atherosclerotic injury and stopping the progress of atherosclerosis as well as an atherogenic index.Save