Home » Yoga Asanas » You are reading »

Yoga Nidra is a Sanskrit word which can well be defined as “yogic sleep” in English; it is a condition, where a person gets a perception between awakenings and sleeping, mostly experience like going-to-sleep stage. 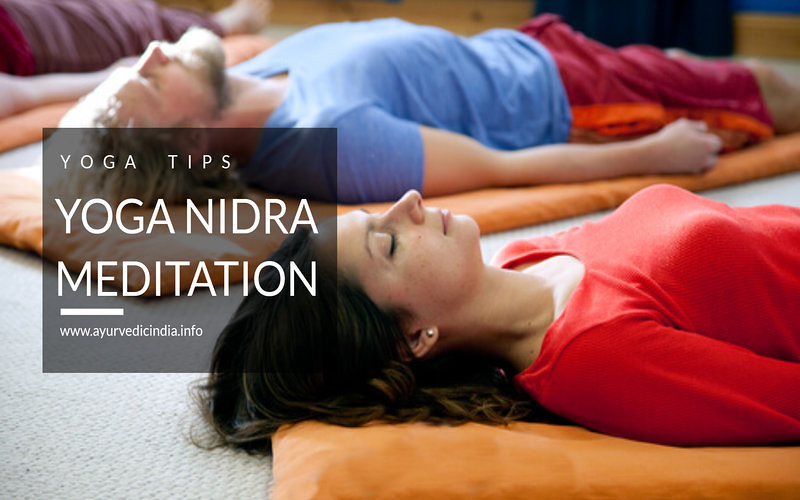 Yoga Nidra is a state in which the body is totally calm; person completely gets the awareness of the inner world by following a set of verbal instructions.

What Is Yoga Nidra?

Yoga nidra is a type of yoga mediation, which has been practiced by yogi for more than centuries. They practiced it so that they could intentionally view their “samskaras”(impressions of the mind).

Yoga nidra is a process in which one could purify their “samskaras” in order to move closer to liberation or moksha. The practices of yoga or so-called yoga system (ashtanga yoga) are combines of eight limbs, and each has its own function and work.

The eight limbs of the yogic path.

Yoga nidra is a type of meditation in which the practician goes in to their alpha state and their focal point moves to the third eye chakra(sahasrara). Yoga nidra also inflames the hormones in the pineal gland, which releases a hormone called “melatonin.”

This hormone plays a significant role in reducing stress and to boosts the immune system that helps to prevent illness. Besides this Yoga, nidra can also help to harmonize the brain hemispheres and can promote better mental performance if regularly practiced.

The word “yoga” was first mentioned in “Rig Veda” which is known to be the oldest sacred texts of the civilization. Rig Veda was a collection of texts, which hold mantras, songs and various rituals’ ways to be used by Brahmans and the Vedic priests.

The practice of yoga was lost for many centuries, eventually in the middle of the 20th century Swami Satyananda Saraswati threw light on yoga and about yoga uses, yoga benefits.

For many years, he spent time studying the various tantric (ancient) scriptures and had mastered the practice. Later on, he became a teacher and began to teach his students on yoga and its eight limbs system, Yoga Nidra is also one among it. Swami Saraswati form of nidra involves eight stages

The basic structure of Swami Saraswati’s guidances has been continued on through the past half century, with some transformations being made by several people over the years.

Many scientific studies have been managed in an effort to verify the subsistence of “a supernatural consciousness”, in Hindi it is described as a “nidra state” that exists in the middle of sleep and centripetal awareness.

According to study article published in the Indian Journal of Physiology and Pharmacology researchers, it has been found that performing Yoga Nidra improved their blood pressure as well as a heart rate variable along with hormone irregularities in women.

In the second study researchers at Shayam Shah Medical College found that there were a handful of variations in blood-glucose levels in people with type-2 diabetes after they had practice Yoga Nidra for consecutive 30 days.

Another research was performed by Dr. Hull, at John F. Kennedy University, involving war servicemen who severe PTSD at Vietnam and Iraq. He reported that after eight weeks of regular Yoga Nidra practice, they found reduced in emotional reactivity, rage as well as anxiety.

Similarly other study published on 2014 in the International Journal of Yoga Therapy stated that there was significant decreases in negative thoughts of self-blame and depression.

This shows that numerous studies firmly verify immensurable beneficial effects of meditation. Whatever the method may be can work from metabolic syndrome to clinical depression.

Yoga Nidra Technique – How to Do

1. The Body Posture: Normally Yoga Nidra session can take from twenty to forty minutes to complete one session. Yoga Nidra is practiced along with doing other postures (asanas).

The person lies on his or her back in shavasana, totally relaxed it is also known as corpse pose posture. The eyes are lightly closed, arms are kept with palms facing upwards and fingers are half lifted from the ground, breathing is natural and quiet.

It should be should be something bigger or higher, like awakening your own spiritual potential. It should be a successful undertaking that will help to achieve your total health or will give a positive help in spiritual progress.

3. Rotation of consciousness: Practicing of yoga can help you to be in touch with your body. It can help to recognize mental or emotional strain it gets in relaxation and help person in control of Consciousness. Rotation of Awareness is a procedure in which all these parts of the body must be progressively in relaxing mode like,

During this process think or experience your body as an object and your mind as an instrument of your inner spirit which direct the flow of prana into your body.

Going through the process of relaxing imagine that the prana, (life force” or “vital principle) is flowing in to the body through this part and relaxing, revitalizing the whole part at the time you should inhale and exhale freely. Make sure that you move your mind from one part of the body to another, keep your body still.

Generally, it is practiced with two opposite feelings like cold and cold, heaviness and lightness, sorrow and joy, pleasure and pain, etc. This procedure can help you to put your emotional in relaxation and in formation of strong willpower.

6. Visualization: It is a final stage of “yoga nidra” that relates to mental relaxation. In this finishing stage, one should try to visualize the objects such as symbols or images that hold universal significance like river, mountain, temple, church, ocean, cross, Saint, flower, clouds, etc.

1. While finishing up yoga nidra once should repeat the sankalpa (promise to self) again. Thus deliberately one can direct the unconscious mind about the goal in life.

Throughout this period of time, the unconscious is very responsive and therefore, one may accept the implication from the conscious mind with more intensities.

It is claimed that believing in the sincerity and regularity of the sadhana, the determine bears fruit in sadhaka’s life.

2. To come to your consciousness back to your body, slowly move your fingers and toes, take a deep breath and turn the right side and sit.