Ashwagandha is also known as Indian winter cherry which is the most important herbs in Ayurvedic system of medicines. Ashwagandha has been used as an herbal therapy for more than hundreds of years. Ashwagandha is biologically known as “Withania somnifera”. Ashwagandha Plant size generally varies from 1 to 5 feet in height. 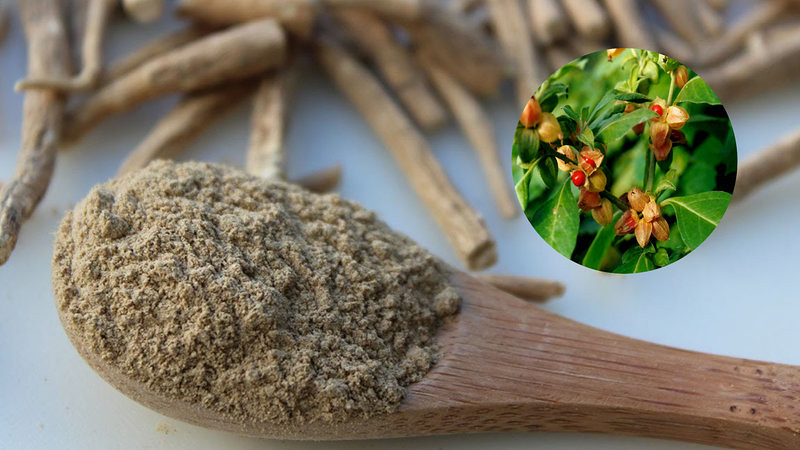 Ashwagandha is found everywhere in India especially in northwestern part of the sub continent, but is now a day’s Ashwagandha is cultivated in fields because of its great commercial demand.Root of Ashwagandha Plant is used which contain biochemical like tropine, anahygrine, cuseohygrine, and anaferine etc.

It also contains glycosides, and amino acid. Due to its properties it has great respect in the eyes of herbal reachers, because of its vast area of application used by many Indian. Ashwagandha is used to treat fevers, inflammation, and to protect against illness or infection. It has generally been used to boost the improve memory, immune system, and to promote overall wellness.

The health benefits of Ashwagandha

Ashwagandha is an Adaptogenic plant, which means that it helps fight and control stress. It is also sought for its properties to sleep and to protect the central nervous system.

The list of properties and benefits offered by this plant is long and among the best you can find the following:

Ashwagandha is a great ally in the fight against diabetes, as it has properties that help lower blood sugar levels in patients with type 2 diabetes.

The Indian ginseng alters healthily glucose levels found in blood and urine, resulting in increased insulin sensitivity and prevents the onset of this disease, while maintaining the levels of this hormone controlled equally.

Ashwagandha has great properties that collaborate with our immune system and strengthen it naturally, which shields our body from the attack of viruses, bacteria and infections.

One of its benefits is that it increases the levels of white blood cells, which are responsible for fighting infections and keeping our body protected. In addition to helping control the fever caused by the flu.

The Ashwagandha brings extra energy to the body, is responsible for giving vitality and resistance, as it fights fatigue, so it is highly recommended for athletes and athletes.

It is very helpful for people suffering from anemia, as its properties are responsible for increasing the number of red blood cells in the blood.

The root extract of Ashwagandha is used in a concentrated way to reduce stress and anxiety, as demonstrated by different studies, mostly carried out by the ayurvedic medicine.

These studies have found that the properties found in this extract help reduce the levels of cortisol, which is the hormone responsible for increasing stress in our body, which brings multiple benefits to the quality of life.

The Withania somnifera is of great help for the central nervous system , as it is a great source of antioxidants that are responsible for combating free radicals that cause cell aging and can lead to the onset of diseases.

Studies have shown that Ashwagandha is also responsible for improving memory, which is why it is recommended for patients suffering from Alzheimer’s disease, since it slows the progression of this disease.

This plant is known for its aphrodisiac effects, since it is responsible for increasing libido in men, but also has benefits in their fertility.

It is used in the traditional medicine of India and other parts of the world, to increase the fertility of men. By taking it, their stress levels are reduced, they manage to produce sperm of better quality, which leads to their being more likely to conceive.

One of the consequences related to different diseases such as diabetes and bone diseases, is the inflammation of parts of the body, where it has been proven that Indian ginseng is of great help to reduce it.

This plant is known to act as an inhibitor of cyclooxygenase, which is responsible for reducing pain and inflammation, so it is very helpful in the treatment of diseases such as arthritis.

Like many other foods, Ashwagandha has great properties that help prevent the appearance of cancer cells and fight them.

The ayurvedic medicine has conducted several studies which demonstrated that this herb prevents tumor growth and interacts with radio- and chemotherapy treatments to treat different types of cancers such as colon, breast and lung.

9. Reduces the symptoms of menopause

Ashwagandha also has benefits for women, since it makes the passage through menopause much more pleasant by reducing symptoms such as excessive heat and mood swings.

This Adaptogenic plant helps regulate the secretion of hormones during menopause, which reduces all its symptoms, managing to relax the mind and release all the stress and anxiety.

This plant helps improve the health of the cardiovascular system thanks to the amount of antioxidants and anti-inflammatory properties it has.

It acts by making the walls of the heart muscle stronger, while it is responsible for reducing the levels of bad cholesterol and triglycerides in the body, which in turn prevents cardiovascular disease.

11. Helps to have healthier hair

Ashwagandha is also beneficial for hair, as it strengthens the hair follicles, making your hair much stronger, resistant to damage and prevents hair loss.

By reducing the levels of cortisol in our body, it also reduces stress, which is one of the causes of hair loss.

12. Improves the health of the skin

Being rich in antioxidants, Indian ginseng helps fight the signs of aging and premature aging, caused by free radicals found in our body.

With the consumption of this plant you get a much softer, smoother skin, prevent the appearance of wrinkles and help eliminate different spots caused by sun, age and other factors.